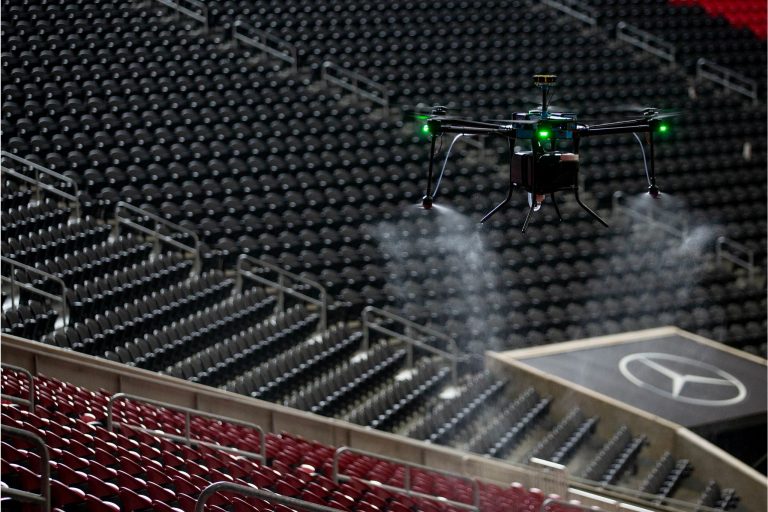 Despite a recent COVID-19 outbreak in the NFL that resulted in cancelled games, some teams are planning to welcome back fans over the next few weeks. The Atlanta Falcons are one of those, and to reduce the risks, Atlanta’s Mercedes-Benz Stadium (MBS) will be among the first sports venues to sanitize key areas using drones (via CNN).

MBS will use Lucid Drone Technologies’ D1 disinfecting drones to disinfect the seating bowl, handrails, and glass partitions at the stadium. “This stadium is incredibly large and as we begin to slowly welcome fans back, these drones allow us to maximize the time between games and private events to thoroughly sanitize,” said building operations manager Jackie Poulakos. The use of drones reduces seating bowl cleaning times by 95 percent and is 14 times more efficient than regular backpack foggers, according to MBS.

While the Falcons appear to be the first NFL team using disinfecting drones, the Carolina Panthers are taking a different, equally techie approach. That team is using Xenex Disinfection’s LightStrike Germ-Zapping Robots that blast areas with UV light to damage virus DNA and render it inert. However, the team is only using the devices in locker rooms, weight room, rehab areas, suites and offices, and not in the general seating areas. That’s because the device is usually used to disinfect hospital rooms and has a limited range.

Ensuring that surfaces are virus-free is a good step, but the Centers for Disease Control (CDC) now says that surface transmission likely plays a minor role in spreading the coronavirus. Rather, experts believe that you’re more likely to catch it via droplets from someone coughing or sneezing, or possibly even smaller particles via airborne transmission.

Uber is buying Postmates for $2.65 billion

Hillary Clinton Whines on Her Birthday, ‘I Was the Candidate That Trump Basically Stole an Election From’

Parents defend UK headmistress after she was forced to apologize for lesson on Black History Month, but won’t give their names