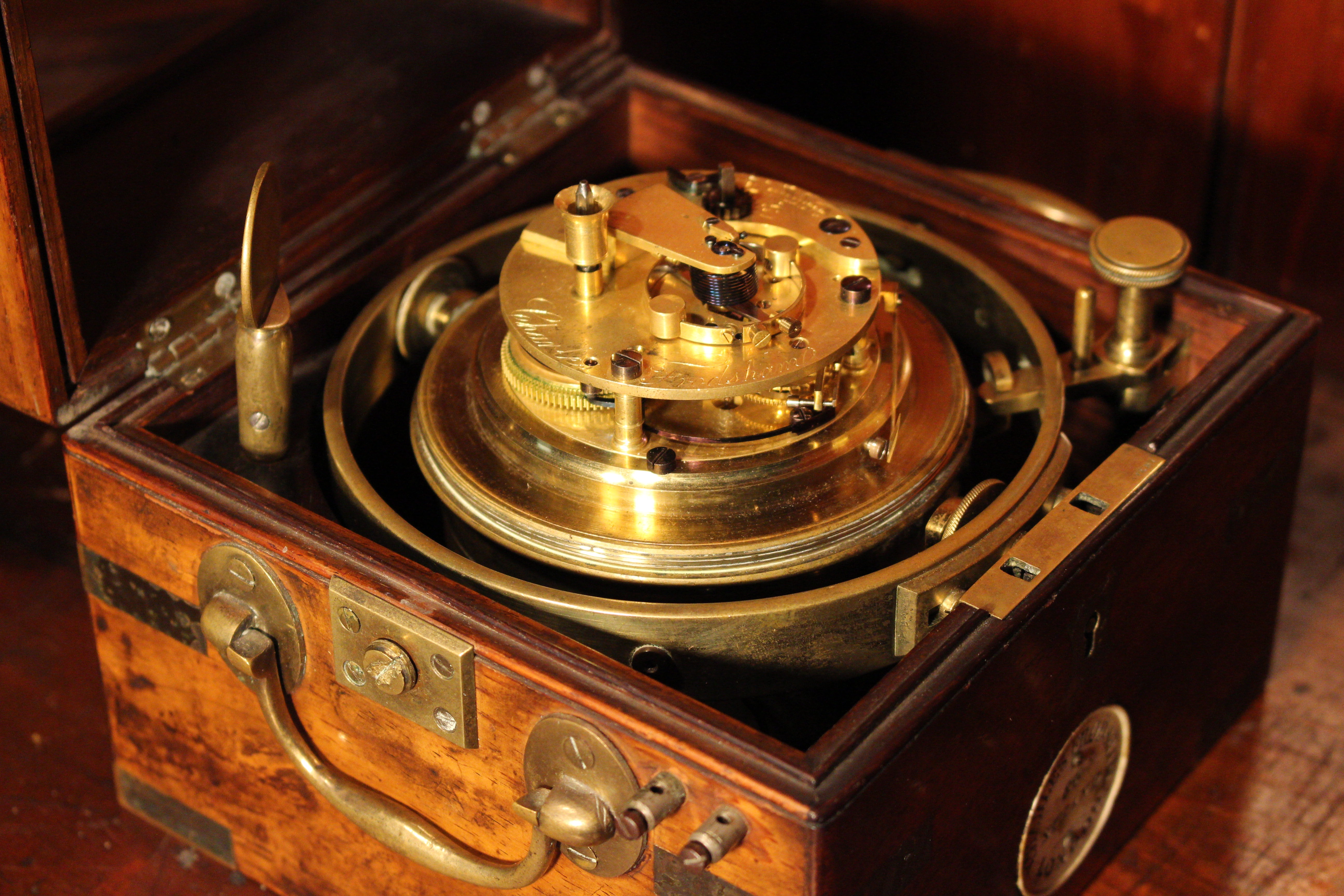 As ephemeral as space and as fundamental as gravity, time is an aspect of this universe that cannot be felt, only experienced through its cumulative passage. In his latest book, On Time: A History of Western Timekeeping, author Ken Mondschein, traces society’s continued attempts at ever more accurate timekeeping — first via the observation of the stars, followed by sun dials, mechanical clocks, and onto modern atomic devices — and how the Western world would not exist in the technological state it does today without the ongoing efforts to bisect our notion of time into continually smaller, more regular intervals. In the excerpt below, Mondschein recalls the tragedy that befell Admiral Sir Cloudesley Shovell and his 21-ship armada at the cliffs of Scilly. But out of this loss of life came a new technology, the chronometer, which would prove vital in preventing similar future tragedies as well as helped European colonists spread both themselves and their notions of timekeeping across the world’s oceans.

Punctuality is the stern virtue of men of business, and the graceful courtesy of princes. — Edward G. Bulwer-Lytton

History loves winners, but sometimes it’s the losers who are more interesting. Take, for instance, the tragedy that befell Admiral Sir Cloudesley Shovell one autumn evening in 1707 off the rocky Isles of Scilly, which lie 28 miles (45 kilometers) off Cornwall in the southwestern corner of Great Britain. Shovell, commander in chief of the British fleet, was returning from attacking the French navy with a flotilla of 21 ships. Though their mission had gone well, the British were beset with storms on the return voyage and went badly off course. The standard route would have taken them past the Island of Ushant (French: Île d’Ouessant), the traditional marker for the southern end of the English Channel; through the Channel; and then up the Thames and to London. On the night of October 22 (by the Julian calendar), Shovell and his men thought themselves safely west of Ushant. However, owing to the foul weather — and the impossibility of determining their exact position with navigational techniques of the day — he was actually on a collision course with Scilly. Four ships — Shovell’s flagship Association, the Eagle, the Romney, and the Firebrand — ran aground on the rocks and quickly sank. In all, about 1,500 sailors and marines were lost, with only one crew member from the Romney and 12 from the Firebrand surviving. The commander was among the dead: the bodies of Shovell and his two stepsons washed up on a beach some 7 miles (11 kilometers) away a day later.

This tragedy affected Great Britain in several ways. First, Shovell was given a state burial in Westminster Abbey and treated as a national hero. Second, as they are wont to, stories and legends grew up around the disaster. One held that Shovell washed up alive, but a beach combing Scilly native murdered him for his emerald ring.This might have some basis in reality, since Shovell was indeed missing his ring, but he was also highly unlikely to have survived very long in the frigid water. Another, less likely legend is that a common sailor from Scilly warned Shovell that they were off course and would run aground, but the low-ranking mariner was ignored (or, worse, punished). This is plainly impossible, since all hands on the Association were lost and no one could have related the tale. But the fact that the story was considered credible shows that navigation at sea was reckoned more an art than a science — which brings us to the third, and more lasting result of the Scilly disaster: in 1714, Parliament offered a prize of £20,000 for anyone inventing a foolproof means of determining longitude at sea. Specifically, it offered £10,000 for a method accurate to within one degree, £15,000 for 2/3 of a degree, and the full £20,000 for a method accurate to 1/2 degree. This was an enormous sum for the time — equivalent to tens of millions of dollars in today’s money, though direct comparisons are impossible.

This princely reward was still deemed a bargain by those who offered it. Seafaring was the lifeblood of nations in the early modern world, but it was fraught with danger. Ships carried gold from the New World to Spain; enslaved human beings from Africa to the New World; tea and spices from Asia to England and the Netherlands; and explorers, missionaries, merchants, colonists, soldiers, and administrators to secure their mother countries’ hold on their new territories. However, for lack of a means to precisely determine a ship’s position, sea voyages could be extended by weeks or months, dooming sailors to slow death by scurvy, starvation, or thirst as their captains searched fruitlessly for land. This ignorance was militarily disadvantageous, as well: needing to keep to known shipping channels, Spanish galleons could easily be intercepted by British privateers. Finally, as the case of the unfortunate Cloudesley Shovell shows, there was the ever-present danger of running aground at night or in foul weather.

All of this was for sailors’ inability to determine their exact position, which requires knowing the longitude. The means by which this technical challenge came to be solved by John Harrison, a self-educated man from an obscure background, is well known: Dava Sobel explains his invention of the chronometer thoroughly and entertainingly in her book Longitude. (The term “chronometer,” meaning a really accurate clock suitable for navigation, was coined by the German academic Matthias Wasmuth in 1684.) I, however, think the story is more interesting if it’s told from the opposite direction — not as the heroic tale of a lone, revolutionary genius who overturned centuries of thought but as a story about hard-working experts laboring collaboratively over long years. This is, after all, the more usual means by which scientific knowledge creeps forward. In this case, the experts put their faith in a means of determining longitude that did not rely on tried-and-true astronomical observations — and, ultimately, they succeeded in their task. While the myth of the lone genius is a much more appealing narrative, it is also a misleading one. Though the chronometer represents the triumph of simplicity over complexity — and thus exemplifies our themes of precision, accuracy, and ease of use — in the end, the more informative story may not be Harrison’s but that of his great opponent, Nevil Maskelyne, who championed the more complicated astronomical “lunar-distance” system.

Despite the fact that the chronometer eventually replaced the lunar distance system, Maskelyne was influential to the history of timekeeping in a way that was arguably more important: he was instrumental in establishing Greenwich mean time as the standard against which all other times were to be compared. The local time at sea or in part of a far-flung colonial empire wasn’t the most important time to know; rather, what was the most important was the time in an arbitrary location back in England as indicated by the face of a clock. What’s more, this time wasn’t taken from looking at the sun or stars at whatever location you happened to be in, but rather it was an imaginary, “corrected” standard time — Newton’s absolute time made flesh. By comparing the local time against this imaginary time, you found your position on the globe. In short, universal Newtonian time was something European colonizers projected over the whole world. The chronometer was a necessary device for keeping this time, but arguably, it was the mental concept that was more important. This chapter will first look at the history of the longitude problem, followed by the controversy about how to solve it, before turning to how the Industrial Revolution incorporated this “practical Newtonianism” to regulate society and the far-reaching effects of this development the world over. Much like ships at sea, the world of work and production for the entire human race increasingly came to be regulated by objective, independent, mechanical indicators of time that were divorced from any human perception or natural sign. This idea of time became — albeit unevenly, with fits and starts — the time the world ran on.

Dropbox was profitable for the first time since going public

Putin: Hunter Biden ‘made very good money’ in Ukraine, but Moscow isn’t aware of ‘anything criminal’ there

Business that Joe Biden’s son, Hunter, “have had or might have” in Ukraine has nothing to do with Moscow, President

Woman boasts her DYING pro-Trump dad voted for Biden because ‘it matters to his girls’, but not everybody feels the inspo

Third time’s the charm? Armenia & Azerbaijan pledge to resume ceasefire on Monday after talks in Washington